As he hits up Australia & New Zealand for his highly-anticipated 'Redemption' tour, TDE rapper Jay Rock sat down with Culture Kings for an exclusive interview, talking about authenticity, inspiration, success and more. Check out what went down as we spoke to the man himself.

Culture Kings: Yo, Jay Rock! Thanks for joining us - really appreciate your time.

Jay Rock: What up champ! What’s goin' on fam?

CK: How was the flight out to Australia?

JR: Yeah you know it’s all good. First class flight out here enjoyed myself, fell asleep and woke up out here and couldn’t wait to be here.

CK: For some of our readers who may not know much about you can you give us a rundown on who Jay Rock is and your music?

JR: Ah well you know I’m Eastside Johnny straight out of Watts, you feel me. People should know me from ‘Money Trees’ [from Kendrick Lamar’s 'Good Kid, m.A.A.d City) and my old albums, to the new album I just put out. I’m a Grammy Award winner, I mean what else could you ask for haha. Everybody should know my name and be screaming Jay Rock right about now.

CK: For sure. They’d be sleeping real hard on you if they didn’t know you by now. How did you originally get into music, was it something you just grew up around and decided it was what you wanted to do?

JR: Oh yeah, of course man. You know I grew up in a house that had music playing all the time you know I grew up on oldies. My mum was always playing the blues, that soulful music and gospel. Then once I stepped outside my project building you know that’s where all the gangster music was being played you know. I grew up off the Scarface, The Ghetto boys, NWA... I grew up off all that so you know it was the best of both worlds.

CK: Yeah for sure, the first track I had heard from you was ‘All My Life’, that was back in 2008, can you talk a bit about your sound back then and who you were compared to now?

JR: Ah man I was the young Eastside Johnny right there man. I was that young Jay Rock. You know when I used to rap I used to try put a bit of bass in my voice whenever I needed to.

But you can tell just listening to me back then and listening to me now... you can just hear the growth in my music, and that’s what I always tell people all the time. I’m always working on my craft, just come better than I was before, I’m always polishing myself and always in a competition with myself. You can just hear the difference from then until now - just learning how to play with my voice a little bit.

CK: The biggest constant I can pick is the authenticity in your music, like when you listening to it there’s no doubt you’ve seen, you’ve done and you’ve lived through all the topics that you’re talking about. I find that’s kind of a rarity today, so how important do you find the idea of staying true to yourself?

CK: Yeah definitely, no doubt about that when you hear it. So, let's go back a bit now, it's 2010 and XXL gets you in for that freshman class edition and then that becomes a part of the title of the next mixtape for you. How big was that for you back then and has there been any other kind of moments of success through the years that have caught you by surprise?

JR: Oh yeah man, back then I was happy to be on that cover, I was like ‘Damn!’ you know I’m up on the cover of a magazine so you know it felt good. It was the grind back then I was just tryna tell you everything, whatever I could get my hands on and it’s all a learning experience and that’s part of just living both musically and off the grid man you live and you learn you know.

CK: For Sure. So let’s just get right into the new album 'Redemption' - one of my favourite albums last year for a start, but I wanna know what the term "redemption" means to you personally?

JR: Ah man, ‘Redemption’. It’s just kinda like I feel that God gave me a second chance, from coming off an accident, a real bad accident [a motorbike accident in 2016] to come back and drop a dope album that everybody loves and everybody’s just rooting for me, telling me this is one of the dopest albums ever and this the album of the year, you know what I mean. To be able to win a Grammy... just 3 years ago I was supposed to be at the Grammys but I was in the hospital you know, broken bones and everything. And then, like 3 years later for me to win one, that’s Redemption right there. That’s a cold comeback... it's a motivational tool for people out there that feel like they went through a major setback in their life or feel that they ain't where they need to be right now and just tell them, don't give up, just stay strong, stay on top of your game and stay focused because it ain't over as long as when you wake up in the morning you know you got a new opportunity to get yours.

CK: The first track for me on the album, ‘The Bloodiest’, the violin comes in the start and I was just ready to go. Between that and the next track ‘For What It's Worth’ that touches on a bit deeper type of subject matter, can you discuss the mindset of each of those tracks that you were in when writing them?

JR: It was the mindset of just me coming from off the streets and trying to figure it out like man, do I still wanna be in the streets and do this or do I wanna do music? I always had that battle and that fight because you know just going through situations with labels, going through situations with homies, with some of my homeboys and just you know everyday life shit. Also going in and out of relationships with women and you ask yourself the question like "is this shit really worth it?"

I just laid it all on the line on that record man... in the end I chose music because at the end of the day if it weren't for music I think I wouldn't be here. When I look back, I got a lot of homies that are either in jail for life or they ain't here no more and I was kinda walking down that same path, but I chose music and music is what got me here.

CK: When you do get in the studio do you have a creative process you try to follow? Or do you just let inspiration come and go and take advantage of the right moments when you are inspired to write something?

I listen to the instruments, I just hone in and just get in my zone and you never know what might come out... I'm always trying to be a perfectionist and I just want everything to be right so if I do something and it don't sound right, then I go to the next one. I just keep it pushing but is all about a vibe so that's kinda my process.

CK: Yeah I get that too; it's like sometimes you can't get in that zone but others you just creating magic and smashing through with all these ideas.

CK: I've seen some old clips on YouTube with you and ab-soul and the TDE guys in the studio vibing. With touring is it a bit harder to get in the studio together and do you tend to do things online a lot more these days?

JR: You know, it's like everybody be on the move now so sometimes I get my best ideas when I be gone too like on the road, or on the bus but especially when I was in Europe I was over there and it was just a different type of vibe... Sometimes you just gotta go out and see different shit.

CK: Damn, I definitely need to travel some more man haha. As you said just then your tour just took you out to Europe. What were those shows like and what can Australia expect during these upcoming shows?

JR: Ah man, when I was out there in Europe the vibe was crazy at the shows and the energy was crazy, everybody was turnt up... You know I always wanted to come [to AustrIlia] cuz i always heard good things about Australia. I had one of my family members he was in the Navy and he came out here for a few years and he used to always come home and talk about, "Australia, Australia", haha... Some good energy man, I'm here to have a good time and really connect with the fans out here and just turn up and give them this big redemption tour and hopefully, they enjoy the experience you know.

CK: If it's anything like the clips I've seen from the Europe tour, it's gonna be crazy. Last question - so what's next for you, where are you off to next after this run of shows and what projects are on the horizon for you?

JR: After Australia, I'm back in the lab... hopefully I have another project gonna be by the end of this year before the year is up... I've been recording since I got off the European tour and so once I leave here I'm back in the studio just getting with my producers and giving the people another dope album. It's been some big love and everybody love 'Redemption' so I'm trynna do it bigger and better. Haha just goin hard.

CK: Everyone is gonna be waiting on that project for sure. I hope you enjoy your time out here in Aus and I hope it's everything your family was telling you it was!

JR: Ah yeah man, I'm trynna go hang out with some kangaroos, koalas and all that. I'm a real wildlife type of guy so you know I be lookin forward to all that.

CK: Aight then, Jay Rock thank you for your time man. 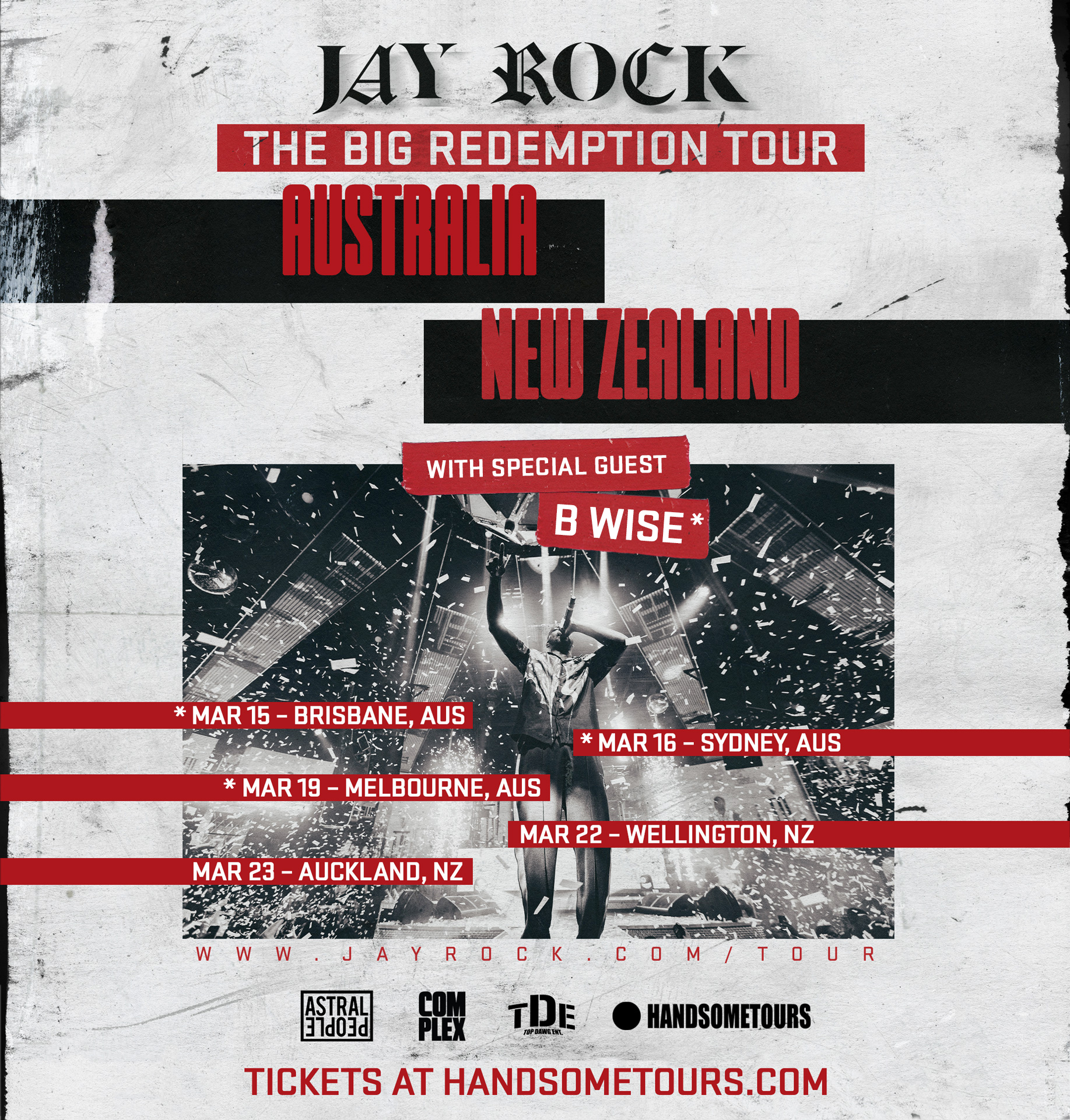